After ten years of uncertainty, a proposal to build a new nuclear power station in the UK has finally been given the go-ahead by UK Prime Minister, Theresa May. The project at Hinkley Point in Somerset, originally launched a decade ago, has had a number of false starts since French energy giant EDF first agreed to construct the new power station, promising electricity from Hinkley by 2017. Ten years on and the plant may finally start to be built.

“Hinkley Point C” will have two brand new (newly-designed and newly-built) European Pressurised Reactors (EPR). These are “third generation” pressurised water reactors whereby water, pumped into the core of the reactor, is heated by the fission of atoms (the nuclear ‘bit’). The station is to employ 25,000 people over the project’s sixty-year lifetime, proponents say, and will provide low carbon energy for six million homes (in total 7% of the UK’s electricity for the sixty-year period).

But some experts argue that the energy market has changed radically since 2006 when the original proposal was tabled and that it is now outmoded.

A new nuclear power station at Hinkley Point C was the UK Government’s response at the time to reduce carbon emissions as set out in the Climate Change Act 2008. ‘We need a “base load power source” to meet our electricity needs,’ says Maxine Symington, a nuclear expert and director at law firm, Gowling WLG. ‘Traditionally this was coal and oil. But we need nuclear if we are to also reduce our carbon footprint. There was cross party consensus that this should be achieved with nuclear power’. 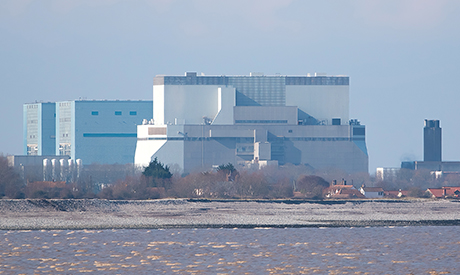 ‘We are in a difficult period of transition from fossil fuel base to non-fossil but we have argued that it would have been possible to meet our climate change targets without Hinkley Point,’ he says. The reasoning for this is that the power market is much more sophisticated than ten years ago. ‘Simply increasing energy efficiency could negate at least two-fifths of Hinkley’s output,’ says Black. ‘Increasing demand-side responses (such as introducing price differentials to change the way people buy their electricity) is also hugely relevant here.’

Burke agrees. ‘Grids are changing; they are smarter and more flexible as they are digitised. You don’t want to have lumps of energy from one source, you want everything to be in smaller units,’ he says. ‘Added to which, renewable costs are coming down – even for offshore windfarms which are still able to get subsidies. Hinkley will look like a dinosaur compared to these nimble methods and systems.’

Though the project has been agreed by the UK Government, there is considerable unfinished business surrounding Hinkley. There are a whole host of legal challenges outstanding: EDF Energy’s own staff have taken legal action against the company for failing to provide sufficient information regarding the proposal’s timetables. There is also a case lodged by Austria in the European Court of Justice against the proposal claiming it breaches European laws on ‘state aid’ (namely, the subsidies which the UK Government may have to pay out if the strike price is not met) and will distort the energy market.

‘‘A twentieth century deal for a twenty-first century energy market.

Further challenges could emerge if there were to be any renegotiation or alteration of the terms of the project. ‘Changes to the operation or specifications of the project, if they altered the overall financial balance in favour of the operator, could lead to further challenges that the new package amounted to state aid by the UK government,’ says Gordon Nardell QC, a barrister at 20 Essex Street and convenor of the IBA Working Group on replacement of the EU Renewable Energy Directive.

There is the small matter of the French election in 2017. EDF Energy is 85% state-owned and at least one candidate in the upcoming elections, Marine Le Pen, has said her National Front party would not support EDF Energy’s involvement in Hinkley. ‘There are quite a few scenarios where this project could yet be derailed,’ Black concludes

The most fundamental unknown is the EPR itself. There is not yet an EPR operating successfully though four are being built (Olkiluoto 3 in Finland, one in Flamanville, France, and two in China – in Taishan). Only one of the Chinese reactors is ready for testing and the one on the French Normandy coast at Flamanville is being investigated by the French nuclear safety authority following concerns over weaknesses in the reactor’s steel.

Perhaps this is just business-as-usual when it comes to infrastructure projects of this kind, as Symington points out: ‘as with any updated design it is taking time to work out. It is not so unusual or surprising to experience teething problems.’

If at any point it was decided to use a different reactor to the EPR, then, as Nardell explains, this would involve the UK Government in further legal entanglements: "The approval process for the current EPR design was challenged (though unsuccessfully) in a judicial review. If there were a proposal to change to a different reactor, then it is probable that the government's approval to any new design would also be challenged in the courts."