The International Bar Association’s Human Rights Institute (IBAHRI) today announces the release of a report on a trial observation conducted in Myanmar into the proceedings taken against four accused charged with the murder of U Ko Ni, a prominent lawyer. The IBAHRI welcomes the concern evidenced by Government of Myanmar officials regarding the need to respond vigorously to the murder of the leading human rights lawyer. However, as the observers who attended the trial from 16 June 2017 to 15 February 2019 noted many instances where basic rights for those accused were not respected, the IBAHRI emphasises that it is vital to uphold essential human rights in the criminal process taken against those accused.

The report, The murder of U Ko Ni: IBAHRI trial observation highlights fair trial concerns in Myanmar, reveals the conduct of Myanmar’s authorities as having fallen significantly short of both international and domestic legal standards which safeguard the accused’s right to a fair trial. The report identifies a number of serious breaches of fundamental human rights, including: failure of police to follow legal procedures; continued detention of those accused of bailable offences; allegations of torture and ill-treatment during detention; intimidation of witnesses; denial of access to a lawyer during pre-trial detention; failure of the court to exclude evidence obtained unlawfully; obstruction of the defence’s access to evidence; failure to respond to threats against lawyers; inappropriate deference towards the testimonies of Buddhist monks; and imposition of the mandatory death penalty. 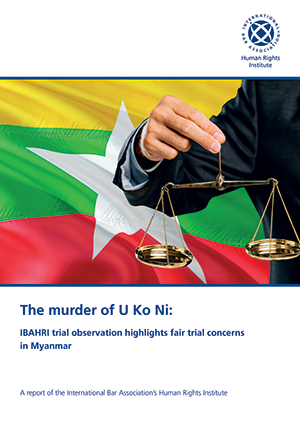 IBAHRI Co-Chair, the Hon Michael Kirby AC CMG, commented: ‘The murder of any lawyer, apparently where engaged in work upholding the law, sends a message causing deep anxiety to all lawyers and other citizens. However, this does not excuse the failure of officials to assure a fair trial and basic human rights to those who are alleged to be guilty of the crime. Otherwise, grave injustice is compounded and human rights standards are not upheld. All individuals are entitled to certain rights and the IBAHRI is concerned that the fair trial rights of the accused in this case were violated, including the rights to life, to liberty, to freedom from torture, cruel, inhuman and degrading treatment and to a hearing by an independent, impartial and competent tribunal.’ He added: ‘The IBAHRI notes attempts made by the Myanmar authorities to ensure that the killing of U Ko Ni does not go unpunished. A heinous crime, murder violates the absolute right to life contained in numerous international human rights laws, such as the International Covenant on Civil and Political Rights (ICCPR).’

While Myanmar has neither ratified the ICCPR nor the Convention against Torture and Other Cruel, Inhuman or Degrading Treatment or Punishment (CAT), the core fair trial rights are articulated in the Universal Declaration of Human Rights (UDHR), a document widely considered to have binding legal status under customary international law. In addition, Myanmar’s national law possesses a number of constitutional guarantees enshrining fair trial rights, including the rights to equality (Article 21(a)), to life and liberty (Articles 353 and 376), to dignity (Article 44) and to equal rights and protection before the law (Article 347).

On 29 January 2017, the constitutional adviser U Ko Ni was shot in the head outside Yangon International Airport by Kyi Lin, who subsequently shot and killed U Nay Win, a taxi driver who attempted to stop him from fleeing the scene.

Based on Kyi Lin’s confession and a further investigation, he and four other men, Aung Win Zaw, Zeya Phyo, Aung Win Tun and Aung Win Khaing, were charged with involvement in the murders. With the exception of Aung Win Khaing, who remains at large, a special bench of the Northern District Court in Yangon Region convicted the men on 15 February 2019. Sentences ranged from the death penalty to three years’ imprisonment.

Kyi Lin, together with Aung Win Zaw, who was found to be Kyi Lin’s main conspirator, received the mandatory death penalty for the premeditated murder of U Ko Ni. Following sentencing, the IBAHRI expressed concern about the imposition of the mandatory death penalty, which is a violation of international legal standards. Kyi Lin was also sentenced to 20 years with hard labour for the murder of U Nay Win. Zeya Phyo and Aung Win Tun were sentenced to five and three years in prison, respectively. All have appealed their sentences.

IBAHRI Co-Chair, Anne Ramberg Dr jur hc, stated: ‘The IBAHRI report notes some positive aspects of the trial, such as efforts to try the accused without delay by holding two hearings a week and maintaining public access to the courtroom. However, it is disappointing that the overall picture serves to emphasise Myanmar’s shortcomings regarding the general fairness of its pre-trial and court proceedings. In a country with a nascent rule of law such as Myanmar, this is a matter of deep concern.’ She added: ‘Among the various recommendations included in the report, the IBAHRI calls on local civil society organisations and technical experts, as well as the international community, to train defence lawyers, law officers, judges and police officers on fair trial rights; provide technical support and expertise to the police on the use of non-coercive methods of investigation; and provide technical and financial assistance necessary for the improvement of the criminal justice system in the country. In addition, the IBAHRI reiterates its call for Myanmar to ratify and implement effectively those core human rights treaties to which the country is not yet a party.’

In total, the IBAHRI makes 22 recommendations in relation to concerns around the administration of justice and commitment to upholding the rule of law in Myanmar.