International Day in Support of Victims of Torture

In the run up to the International Day in Support of Victims of Torture on 26 June, the International Bar Association (IBA) has partnered with the United Nations Office of the High Commissioner for Human Rights (UN Human Rights Office) to raise awareness about the absolute prohibition of torture, the damaging repercussions of its practice on the rule of law, and the active role that the legal profession can have in preventing its use and recurrence.

Below, you will see details of a panel discussion featuring the High Commissioner for Human Rights, read stories about legal professionals working to fight against impunity and download quote cards to share with your peers via social media.

Anti-torture day:
State of the world today - are we going into reverse?

At a time when the absolute prohibition of torture is routinely challenged across the globe, this high-level panel of speakers discussed the importance of reaffirming torture as a human rights violation.

The high-profile panel, which included Prince Zeid Ra'ad Al Hussein - the UN High Commissioner for Human Rights - discussed the damaging repercussions of the practice of torture on the rule of law and the active role that the legal profession can have in preventing its use and recurrence. 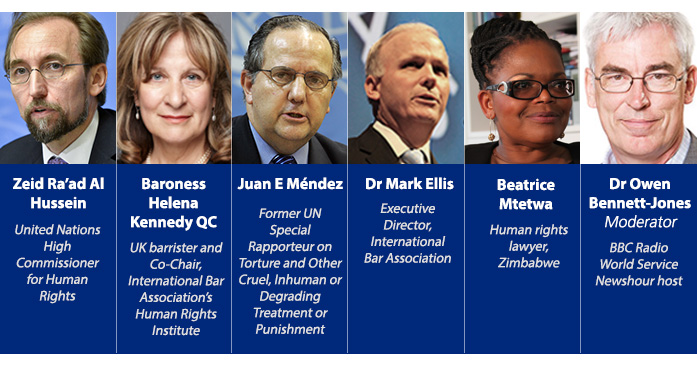 Every day, legal professionals are working on the frontline of the fight against torture. Here are just a few examples: 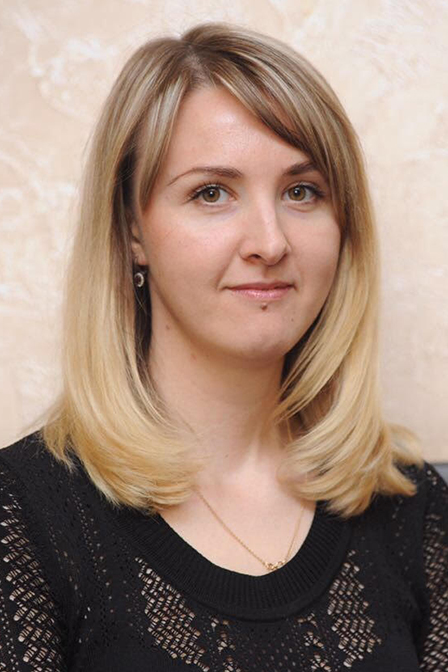 ‘I am a lawyer, but I am also a member of the NGO Coalition Against Torture here in Kazakhstan. On a daily basis, the coalition advises citizens who turn to us with complaints of torture. Some people were themselves subjected to torture; while others approach us on behalf of relatives or friends. The prohibition of torture is absolute, yet we still deal with too many cases of torture. In 2016 alone, our coalition received 163 new complaints of torture and other ill-treatment.

The victims in these cases need legal assistance, which we work to provide. First, we try to use domestic remedies for redress, but if necessary we bring the cases before the UN treaty bodies. Thanks to the networks that we have created, we are also able to refer victims to appropriate psychological and medical care, which can aid their recovery.

When we are not bringing cases before the courts, we try to advocate for victims in other ways. We monitor the trials of defendants who have made allegations of torture and record the reactions of the courts; through public events, publications and posters the Coalition raises awareness amongst the general public; we formulate policy recommendations and even prepare repots, briefings and interventions for international human rights mechanisms at the United Nations, OSCE or European Union.

By providing support to our members, professional advice and engaging in skills development we ensure that the Coalition continues to grow. Working from one case to another we struggle against impunity, and hopefully prevent new acts of torture from ocurring. Our coalition is important because it is not just me, working alone as a lawyer; working together ensures that we speak with one voice, and by working together we can have a greater impact. ’ 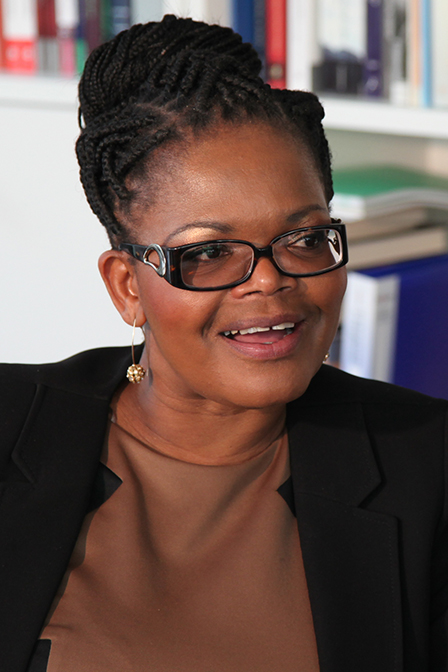 ‘I have supported victims of torture in various ways as a legal practitioner in Zimbabwe. When persons are ‘disappeared’, we immediately endeavor to secure a habeas corpus in court. This always elicits the same response from the authorities: that they had nothing to do with it. However, once the State has accepted that the disappearance was criminal, it becomes easier thereafter to sue the State, or the individuals concerned, for any acts of torture arising from such a disappearance. My strategy in the litigation is to sue perpetrators on the basis that they should be personally liable for all damages arising resulting from torture.

We also refer all victims of torture to an NGO called Counselling Services Unit, which provides them with counselling and keeps full medical records. This collaboration ensures our medical reports do not merely refer to assaults, but give extensive details of all acts of torture perpetrated on the victims, allowing for full explanations of why such acts constitute torture.

The State is obliged to protect its citizens, but more often than not, it is the State, or at least some of its employees, that is responsible for acts of torture. It is therefore absolutely crucial that all human rights defenders stand up for the rights of victims of torture. , Lawyers, in particular, can play a huge role in the prevention of torture by mounting litigation against perpetrators on behalf of the victims, sensitising the courts to the difference between torture and assault, and highlighting that perpetrators should not be able to hide behind the State.’ 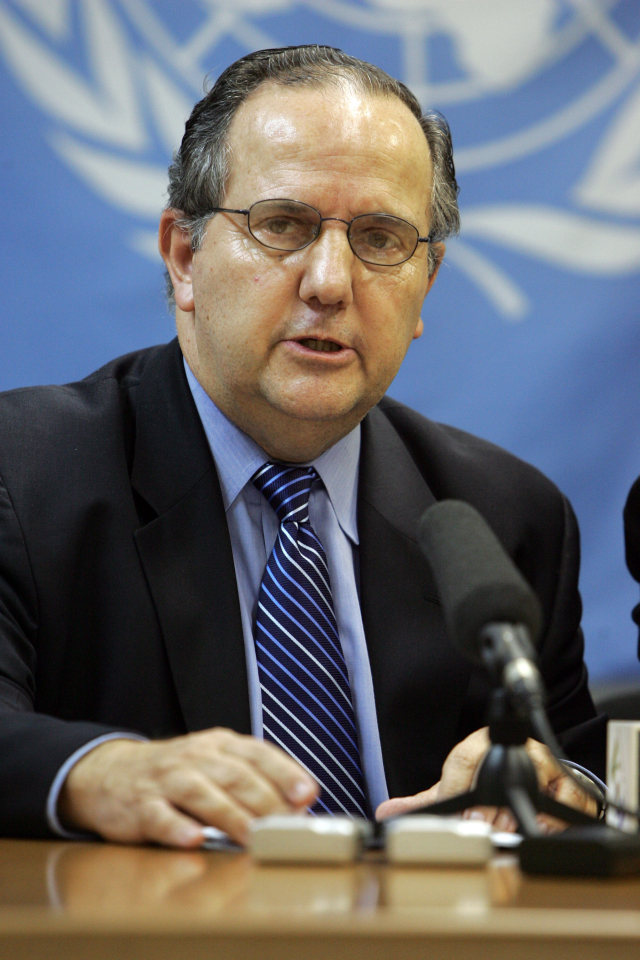 ‘When I was a young lawyer defending political prisoners I was arrested and tortured as a result of my work; but I was lucky. I was tortured less than the perpetrators would have liked thanks to the fact that lawyers connected to my family acted very quickly by invoking the habeas corpus. After that, I was not tortured again.

At the time there was a lot of torture taking place in Argentina, but thankfully this normal functioning of the law was still met. This is why, I am convinced that, as lawyers, we have the main role in the prevention of torture....

For me, it is the cycle of impunity of torture that perpetuates this crime and legal professionals have a large role to play in breaking this cycle. Finding key cases, seeing them all the way and ensuring they result in justice being done, can have a positive effect. I’m not naïve, It doesn’t mean that once we punish one perpetrator we are going to end torture and break the cycle of impunity. We will always have a responsibility to continue insisting in accountability and bringing perpetrators to justice, but by breaking this cycle we can send a message that those who commit this crime will be brought to justice.

Throughout my career, I have strived to shed light on the use of torture around the world in an attempt to end impunity and ensure accountability and reparation for this atrocious international crime.’

Raise awareness about the campaign by downloading and sharing these quote cards on social media: 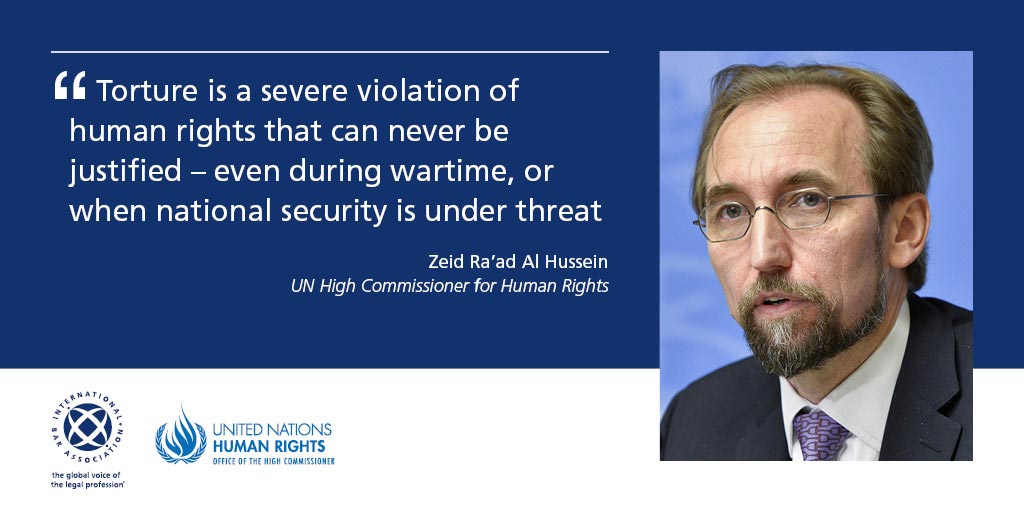 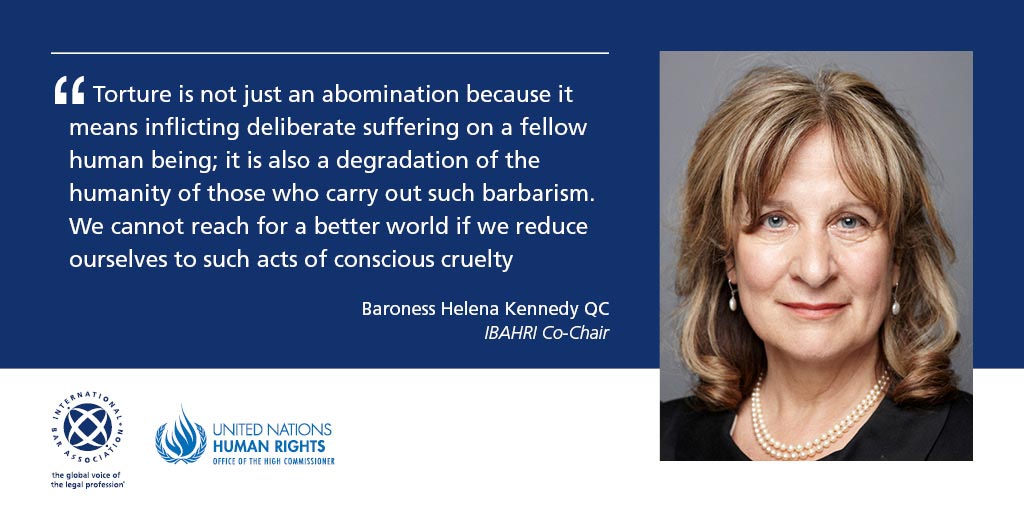 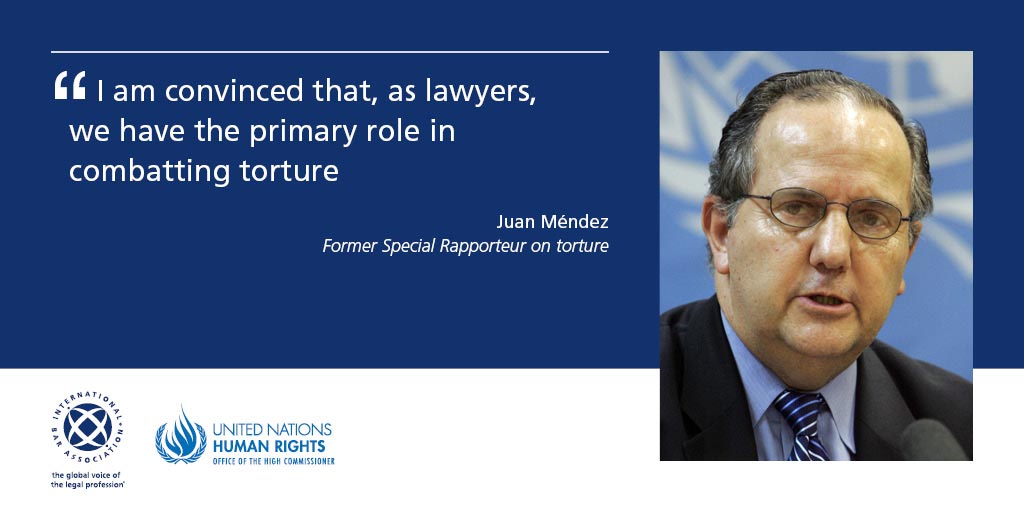 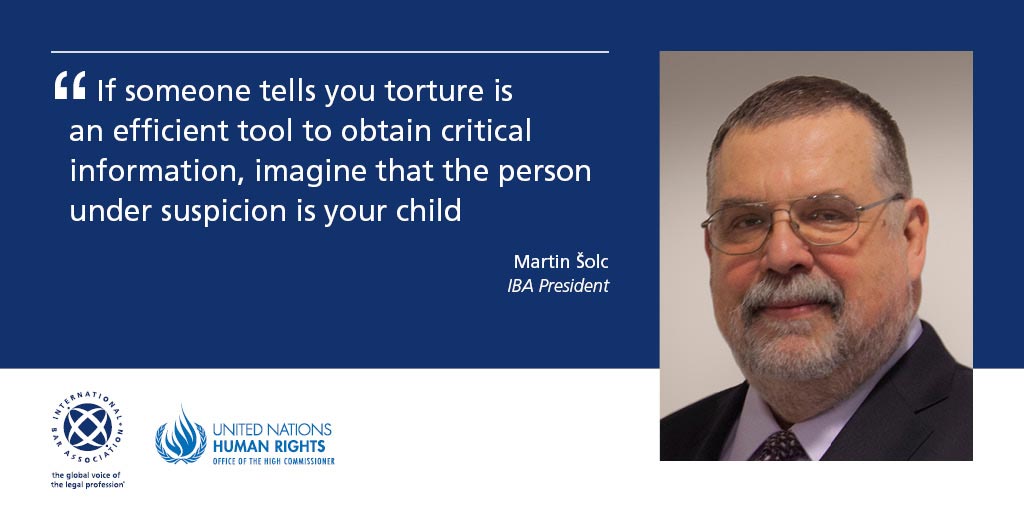 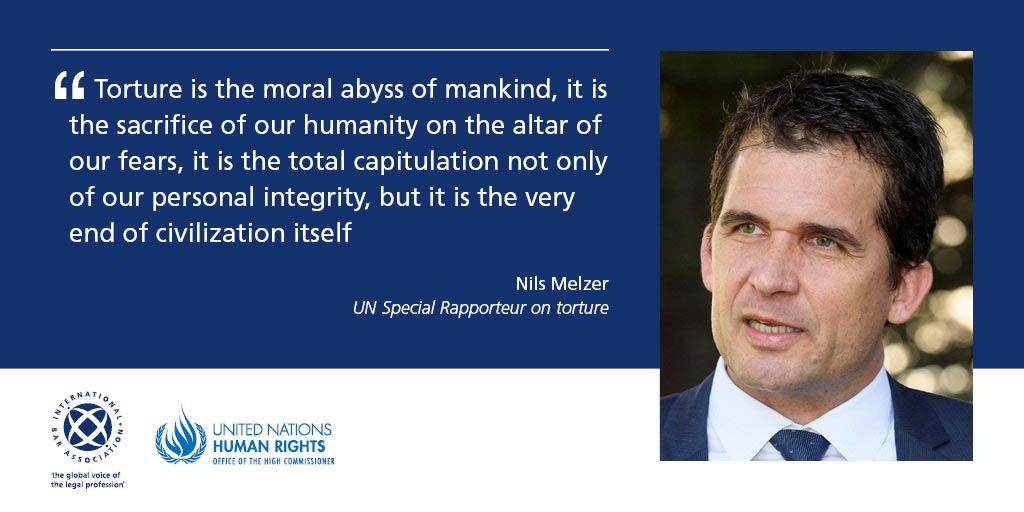 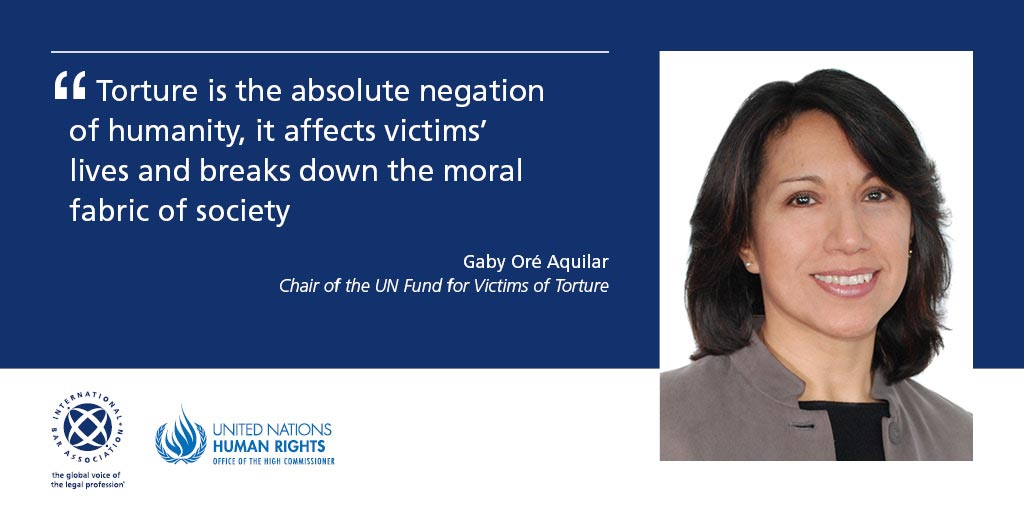 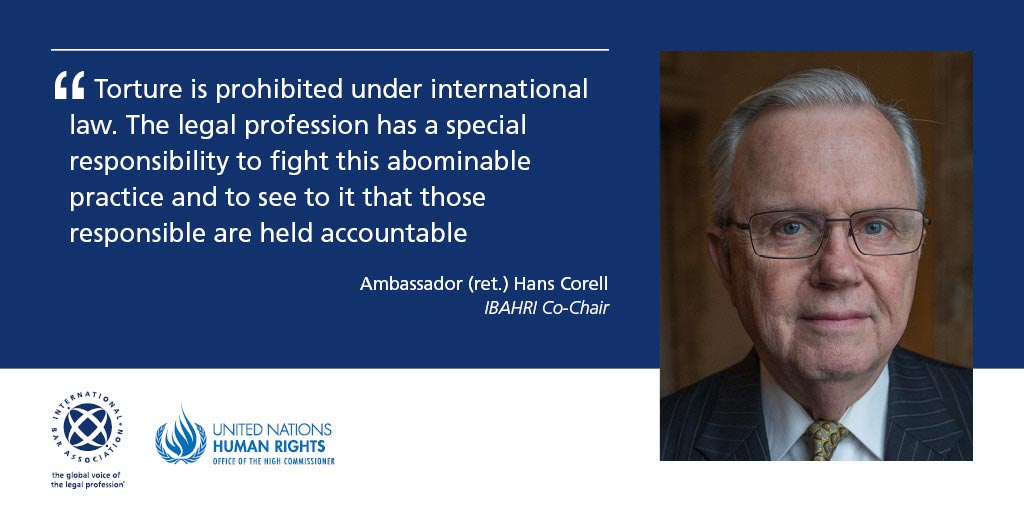 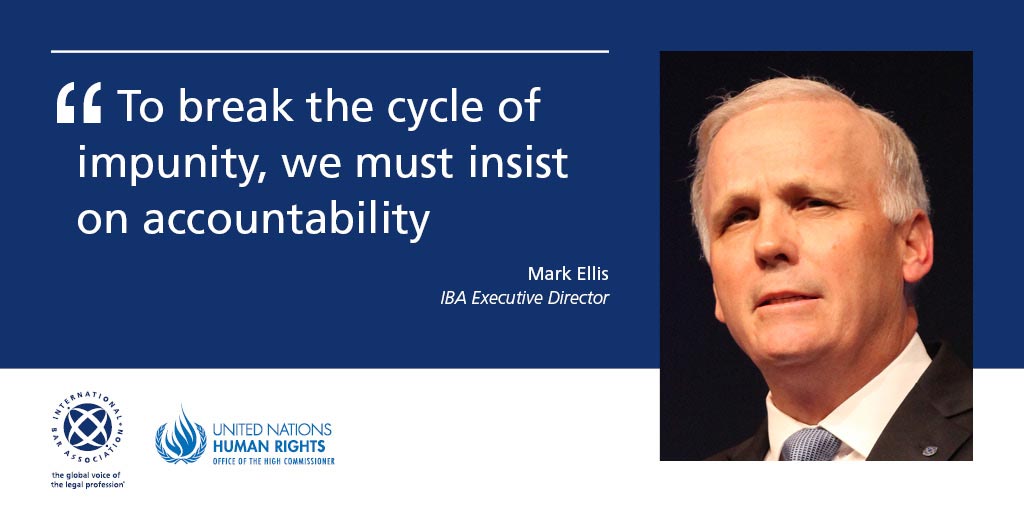 To announce the partnership between the IBA and the UN Human Rights Office, IBA President Martin Solc and IBA Executive Director Mark Ellis sent a letter to the IBA Membership. Read it below:

As the International Day in Support of Victims of Torture approaches, 26 June, we write with the news that the International Bar Association (IBA) is partnering with the United Nations Office of the High Commissioner for Human Rights to advance our shared ambition for the absolute prohibition of torture. As stated by the UN High Commissioner for Human Rights Zeid Ra’ad Al Hussein, ‘torture is a severe violation of human rights that can never be justified – even during wartime, or when national security is under threat.’

On 31 May 2017, both organisations will launch web pages focused on this new partnership, our common objective to eradicate torture, and what each of us can do toward that goal. Please visit this webpage to learn about our work and see where you fit it. We think you’ll be inspired by the accounts of fellow legal professionals fighting impunity.

We ask that you help us spread the word by downloading ready-to-share ‘quote cards’ from the new web pages and sharing them widely via social media. The cards quote many renowned supporters of our work, and sharing them is an important way to contribute to the IBA-UN initiative.

Also, if you are in London on 26 June 2017, please register to attend a high-profile lunchtime panel that includes Zeid Ra’ad Al Hussein; Baroness Helena Kennedy QC, British barrister and member of the House of Lords; Juan E Mendez, former UN Special Rapporteur on torture; and Beatrice Mtetwa, ‘Zimbabwe's top human rights lawyer,’ as described by the New York Times. Moderating the debate will be Dr Owen Bennett-Jones, BBC Radio journalist. At a time when the absolute prohibition of torture is being routinely challenged across the globe, the focus of the discussion will be the importance of reaffirming torture as a human rights violation.

International law is very clear on protecting people in detention from torture and mistreatment, yet across the world severe pain is being inflicted on human beings to force confessions. The repercussions of such practice on the rule of law is very damaging. As legal professionals, it is our responsibility to condemn the use of torture in all jurisdictions; to promote the use of existing rules and protocols for its prevention along the chain of custody; to encourage the use and correct interpretation of international standards in court; and to strengthen institutions and national, regional and international standards to prevent and punish torture. It is in all of our interests to protect the basic rights of detainees.

Through the International Bar Association’s Human Rights Institute (IBAHRI), much work around torture prevention has been carried out. The IBAHRI has strengthened the technical capacity of the legal profession to support victims of torture and to prosecute perpetrators in countries such as Tunisia, Mexico and Brazil. We know that when given the right tools, lawyers play a pivotal role in investigating crimes of torture and achieving justice for victims.

We hope you will get involved, and start by visiting our new webpage and sharing the featured quote cards. Together we can break the cycle of impunity that nourishes the reprehensible crime of torture.