A new International Bar Association (IBA) Legal Policy & Research Unit (LPRU) report, focused on the remaining barriers to gender parity at senior levels of the legal profession, reveals that within the Ugandan legal profession, law firms, compared to other sectors, have the lowest number of women employed at all levels (41 per cent), with only 23 per cent of senior roles occupied by women. The report represents the second set of findings, after England and Wales, of a global nine-year longitudinal study into gender disparity issues.

Overall, the data in 50:50 by 2030: A longitudinal study into gender disparity in law - UGANDA RESULTS REPORT indicates that female representation across the legal profession in Uganda is positive. Women in the law make up 49 per cent of the profession and occupy 40 per cent of senior roles. However, results vary significantly between sectors – law schools, private practice, in-house legal teams, public sector institutions and the judiciary.

IBA President Sternford Moyo commented: ‘Much has been done to advance women’s equality in Uganda and the data in this report is a positive indication of these efforts. However, there are still far too many women who are denied a formal education in this jurisdiction, and [are] therefore deprived of the opportunity to progress in their working life and reach their full potential. This report provides the opportunity to understand the Ugandan legal market and sheds light on some of the problems women lawyers face, especially when trying to achieve a balance between their professional and personal lives. The findings will contribute to our goals of examining whether existing diversity initiatives are helping and ultimately providing a blueprint for equality in the profession.’ 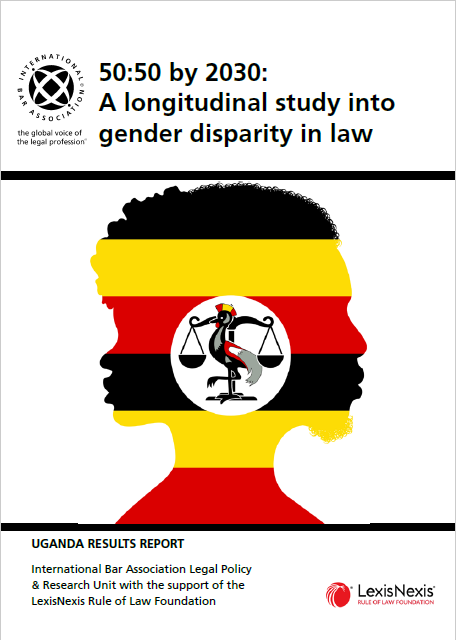 Additional findings from the Uganda report include:

The Report, released in collaboration with the LexisNexis Rule of Law Foundation (LNROLF), is part of the project 50:50 by 2030 – A Longitudinal Study into Gender Disparity in Law, launched in March 2021 on International Women’s Day. Unique in scope and depth, this ambitious project will collect data over a nine-year period, allowing changes to be measured, progress tracked and global trends observed over almost a decade. The project aims to uncover the root causes of gender disparity at the top of the profession, to examine the impact of diversity initiatives in place and to produce a blueprint for gender equality at all levels of the law.

Ian McDougall, Executive Vice President and General Counsel at LexisNexis Legal & Professional and President of LNROLF, said: ‘The LexisNexis Rule of Law Foundation is delighted to contribute to this important IBA project, by providing our survey, reporting, and analytics tools, and the expertise of our employees, through their volunteer engagement, to support this long term study. This effort aligns perfectly with our diversity & inclusion strategy, our commitment to equality and our mission to advance the Rule of Law.’

The first pilot study, released in March 2022, considered the legal profession in England and Wales. A further pilot study will examine the Spanish legal system and the findings will be published in a report later in 2022. The results in these initial reports form the pilot phase of the project and will inform future methodologies as the 50:50 by 2030 project is rolled out to Australia, Chile, India, Japan, Mexico, Nigeria, Republic of Korea, Singapore, South Africa, the Netherlands, Ukraine, United Arab Emirates and the United States.