A new publication regarding torture prevention in Latin America brings together a collection of articles by multidisciplinary professionals who have worked in collaboration with the International Bar Association’s Human Rights Institute (IBAHRI) to promote the effective prevention, documentation and investigation of torture and other cruel, inhuman or degrading treatment or punishment in the region.

The joint IBAHRI and Universidad Externado de Colombia initiative – a Spanish-language book titled Responding to Torture: Latin American perspectives on a Global Challenge – aims to address the gap between international torture prevention standards and the current norms in Latin America. Responding to Torture provides insight from professionals from a wide range of disciplines, including medicine, psychology, public policy and international relations. An Executive Summary of the publication is available in English.

In the publication’s afterword, IBAHRI Director Baroness Helena Kennedy QC asserts: ‘The training of prosecutors, lawyers, judges and forensic experts to recognise the signs of torture and to invoke international law and other legal mechanisms to end such a gross violation of human rights is vital work. This book brings together many of the experts who have worked within Latin America to share their thoughts, hopes and concerns about the extent to which abusive power blights our societies. These experts proudly reaffirm the need for the universal ban on torture.’ 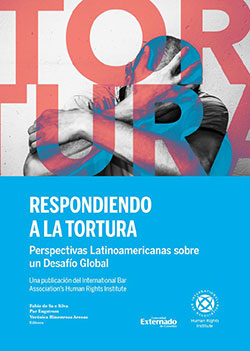 IBA President Horacio Bernardes Neto states: ‘This collection of essays provides a stark and unsettling insight into the challenges Latin American countries are facing in addressing torturous practices. As the authors stress, whilst robust legal protections have an important role to play in the prevention of torture, we must now pay closer attention to the informal practices and structural conditions that enable torture and ill-treatment in Latin America. A more holistic perspective, involving state actors, medical professionals and lawyers, holds the key to halting the spread of torture and other human rights violations.’

Roberto Hinestrosa Rey, Dean of the Faculty of Finance, Government and International Relations at the Universidad Externado de Colombia, noted: ‘Academia plays a fundamental role in promoting the understanding of the ethical and legal implications of serious human rights violations, such as torture. Likewise, it should serve as a forum for discussion, reflection and generation of responses to eradicate them. For the university, it is a pleasure to add its voice to a call that must reach all actors in society.’

IBAHRI Co-Chair, The Hon Michael Kirby AC CMG, a former Justice of the High Court of Australia (1996-2009) commented: ‘Torture is an inexcusable violation of human rights that sadly still occurs in jurisdictions across the world. Addressing this problem in Latin America, as Responding to Torture demonstrates, is an ongoing battle requiring renewed vigour and dedication from a multitude of sectors. In the legal profession, it is essential that we continue to raise awareness of cruel and inhuman practices and provide the necessary training to ensure the eradication of torture, once and for all. Public education is also critical to overcome indifference, ignorance and resignation about this serious and ongoing problem. This issue cannot be addressed by law alone.’