Spain: Significant gap in the proportion of women in top positions of the legal sector, according to new IBA report

A new report from the Legal Policy & Research Unit (LPRU) of the International Bar Association (IBA) indicates that women account for just over half of legal professionals (54 per cent), but only 31 per cent are represented in top positions. This is the main conclusion of the report for Spain 50:50 by 2030: A longitudinal study into gender disparity in law - SPAIN RESULTS REPORT, which is available in both English and Spanish. The Spanish report complements the reports covering the jurisdictions of England and Wales and Uganda, respectively.

In the report’s foreword, IBA Vice-President Almudena Arpón de Mendívil writes: ‘Equality is a matter of law. Equality is at the centre of the law. A female presence at the highest levels of our sector in numbers that at least match the numbers of men will be the litmus test to prove that gender equality really works. Such a presence will also be the most powerful tool to articulate the conditions for gender equality across the legal architecture: in the drafting of rules, their application and their interpretation.’

Between January 2022 and July 2022, 36 legal entities completed a survey in Spain from which the data was derived. Within specific sectors, the findings for Spain’s legal profession were similar to the results for the two previously surveyed jurisdictions of England and Wales and Uganda: The public sector has the highest percentage of female lawyers at 62 per cent, the judiciary follows at 56 per cent and the figure for women working in law firms is 46 per cent. At the corresponding senior levels, the public sector has the highest proportion of women lawyers at 38 per cent and the judiciary 37 per cent, while women lawyers in law firms are least represented at 28 per cent. 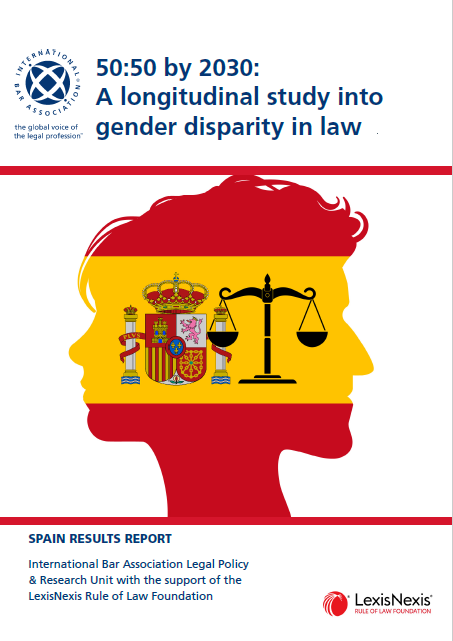 Victoria Ortega, President of the General Council of the Spanish Legal Profession, writes in the report’s foreword: ‘Optimism and perseverance. If I had to choose the two words that best qualify Spanish women who carry out their professional activity in the field of justice, I would choose those two. What lies ahead of us now is the need to persuade the many women who display special talent in the daily practice of law about how assuming collective responsibility has ceased to be a matter of personal ambition and has instead become an essential part in claiming a collective justice that is urgently demanding full equality. Our mission is to encourage a new, higher leap that places us as close as possible to true equality between men and women.’

A significant majority of respondents to the survey (82 per cent) said that they monitor overall gender representation in the workplace. Seventy-nine per cent stated that overall gender representation is monitored, including at a senior level. Regarding workplace initiatives, flexible working arrangements are the most popular, with 82 per cent of respondents having them in place. A similar trend was noted in both the Uganda and England and Wales reports. Leadership training for women was the fifth most popular initiative (at 36 per cent), but considered to be the most effective, with 75 per cent of respondents rating it as ‘very effective’.

Additional findings from the Spain report include:

The findings were discussed at the recently concluded IBA Annual Conference in Miami during the session Men of quality respect women’s equality. IBA Vice-President Arpón de Mendívil gave a keynote address in which she emphasised that the issue of gender equality needs male support and allies to progress and that it is at the centre of law. The session, led by the IBA Diversity & Inclusion Council and chaired by the IBA Legal Policy & Research Unit’s Director Sara Carnegie, included panellists Emma Watson, the United Nations Women Goodwill Ambassador, and Judge Winfred Naigaga of Uganda. A short article on the session appeared in the Wednesday edition of the Conference’s IBA Daily News.

Produced in collaboration with the LexisNexis Rule of Law Foundation (LNROLF), the report forms part of the 50:50 by 2030 – A Longitudinal Study into Gender Disparity in Law project launched on International Women’s Day in March 2021. Unique in scope and duration, the nine-year project aims to uncover the root causes of gender disparity at the top of the legal profession, to examine the impact of equality initiatives and to produce a blueprint for gender equality at all levels.

Ian McDougall, Executive Vice President and General Counsel at LexisNexis Legal & Professional and President of LNROLF, said: ‘The LexisNexis Rule of Law Foundation is delighted to contribute to this important IBA project, by providing our survey, reporting, and analytics tools, and the expertise of our employees, through their volunteer engagement, to support this long term study. This effort aligns perfectly with our diversity & inclusion strategy, our commitment to equality and our mission to advance the Rule of Law.’

The first report, released in March 2022, considered the legal profession in England and Wales. A second report, analysing the situation for women lawyers in Uganda, was published in August 2022. The results within these initial reports form the pilot phase of the project and will inform future methodologies as the 50:50 by 2030 project is rolled out to Australia, Chile, India, Japan, Mexico, Nigeria, the Republic of Korea, Singapore, South Africa, the Netherlands, Ukraine, the United Arab Emirates and the United States.